Bunkerkit is also particularly suitable for the construction of vaults. Bunkerkit complies with class V according to standard EN 1143-1 and is certified by the ECB-S (European Certification Body).

EN 1143-1 is the European reference standard that certifies the resistance of safes, security doors and vaults. It comprises fourteen grades or classes, numbered from 0, I, II, to XIII.

Bunkerkit was tested at the CNPP, the French laboratory officially recognised by the EFSG (European Fire and Security Group) to carry out these tests. During the test, professional assailants with an in-depth knowledge of the product and its construction plans are freely able to choose the tools and methods of attack to employ. Once the tests have been passed, a success report is issued by the CNPP.
To comply with the certificate, Bunkerkit must consist of six certified sides and open by means of a door certified in the same class (or a higher class).

The tests are conducted in laboratories officially accredited by the EFSG (European Fire and Security Group), of which there are currently three: the CNPP in France, the SBSC in Sweden and VdS in Germany.

Other laboratories carry out the tests for standard EN 1143-1, but the results of these tests do not lead to official certification.
Although the test consists of attempted burglary, the procedure adopted differs considerably from those carried out for standard EN 1627-1630.
Here, the tests end when a partial or total opening has been created.

This is when the level of resistance is calculated, using a formula laid down in the standard. This formula takes account of the contact time and the coefficient of each tool/reload used to make the hole defined and gives the ‘RU’ value.

This RU value implies that the attack times could vary from one scenario to another depending on the power of each of the tools used. 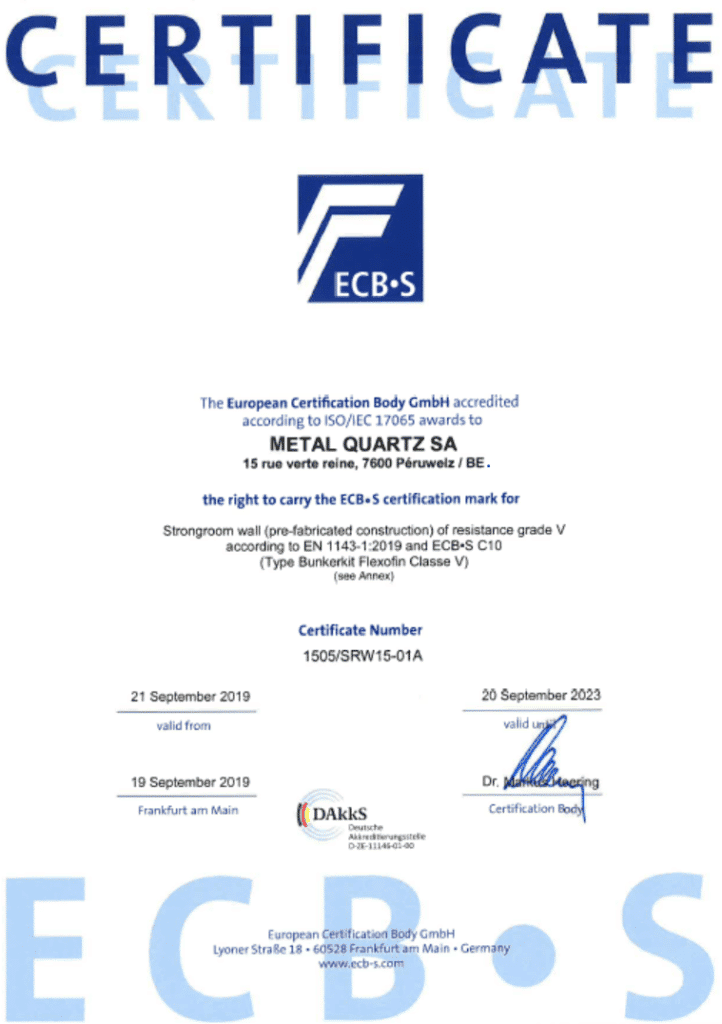 One of the points in common with the burglary resistance tests is that the laboratory receives the plans of the samples to be tested in advance so that the vault, its structure, its composition, its assembly and any weak points can be examined in depth beforehand.

Various attack scenarios are then devised so as to test the resistance of the vault to burglary. Depending on the instructions from the laboratory, several samples will sometimes be provided in order to carry out these different scenarios.

The openings to be made

The test aims to make openings in the elements tested (safes and vaults):

The coefficient of tools and reloads

For each scenario, the assailants can use as many tools as they deem necessary within a defined tool kit (mechanical, electric and thermal tools).

Each tool and each reload (example: grinding disc and discs) has a coefficient allocated to it depending on its power.

The contact time is the period during which a tool and any reload come into contact with the element being tested.

A number of resistance units (RU) is defined by the standard for each grade. This is calculated on the basis of a formula included in the standard which multiplies the contact time of each tool/reload used by its coefficient. The higher the resistance of the vault, the higher its RU value.

The test pass grade is determined by the RU value achieved in order to make the openings defined. Given that there are several test scenarios, the decisive RU value will be the weakest.

The manufacturing quality of Bunkerkit and its consistency over time are overseen and regularly checked by the ECB-S. The Bunkerkit vault bears the official ECB-S certification mark, clearly visible, indicating the resistance class attained. The Bunkerkit strong room also passed the official tests and complies with grades I to IV according to standard EN 1143-1.

These resistance classes are available upon request. Once the grade has been determined by the tests, it is possible to have the vault certified by a body accredited for certification of standard EN 1143-1, that is by one of the official laboratories (CNPP, SBSC or VdS) which carried out the tests and/or by the ECB-S (European Certification Body).

A series of conditions has to be met to obtain certification:

Once certification has been obtained, the manufacturer orders a label from the certifying body, a ‘certification mark’ to be displayed inside each safe/vault.

The Metal Quartz company will be closed from Friday 24 December 2021 to Sunday 9 January 2022 inclusive. Our team thanks you for your understanding and wishes you a wonderful…

By continuing to use the site, you agree to the use of cookies. more information